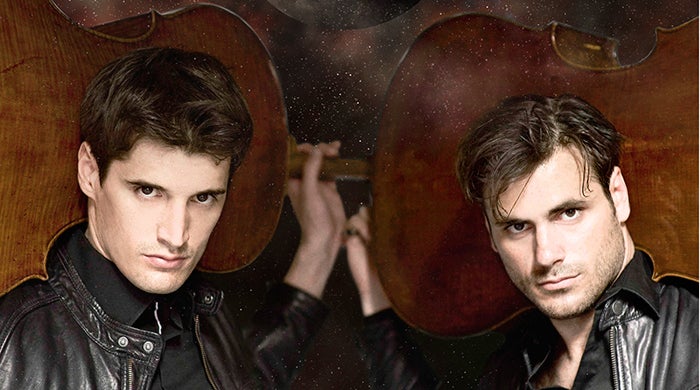 INCLUDING A STOP AT MCCAW HALL APRIL 17

Tickets:  Tickets can be purchased starting Friday, September 18 at 10:00 am at the Box Office located on the west plaza of KeyArena, Ticketmaster outlets, Ticketmaster.com, or charge by phone toll free at (800) 745-3000. All tickets subject to applicable service charges and fees.

What:     2CELLOS, music’s most electric and dynamic instrumental duo, announce the dates for their North American tour which kicks off in January and includes  a stop in Seattle at McCaw Hall in April. They will make stops in 41 cities including Atlanta, New York, Boston, Detroit, Nashville, Los Angeles and Salt Lake City.

Propelled into international fame in 2011 after their version of Michael Jackson’s “Smooth Criminal” went viral the Croatian cellists, Luka Sulic and Stjepan Hauser, continue to wow their fans with dynamic music videos and covers of today’s most classic and popular songs. Most recently their Baroque inspired, yet high octane head-banging video of AC/DC’s “Thunderstruck” garnered over 45 Million views to date.

The duo returned to their rock roots on their recently released, critically acclaimed, third album Celloverse.  2CELLOS playing style has broken down the boundaries between different genres of music, from classical and film music to pop and rock. They have no limits when it comes to performing live and are equally as impressive when playing Bach and Vivaldi as they are when rocking out. They have sold out shows around the globe and also performed with Sir Elton John as part of his band, as well as opening his shows to rapturous acclaim.

2CELLOS are the first instrumentalists to be featured on Glee.  They have also appeared on The Ellen DeGeneres Show, The Today Show, The Tonight Show, and The Bachelor Live Wedding Special.  Their Sony catalog also includes: 2CELLOS and  IN2ITION.