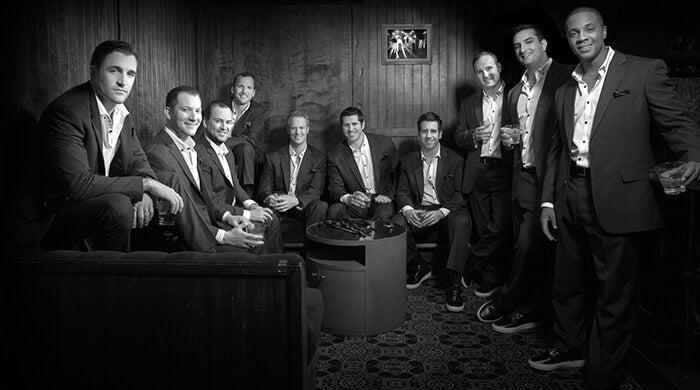 A STOP AT MCCAW HALL ON DECEMBER 31

WITH MUCH ANTICIPATED PERFORMANCE OF “(BACK HOME AGAIN IN) INDIANA”

Tickets:  Tickets can be purchased starting Friday, May 15 at 10:00 am at the Box Office located on the west plaza of KeyArena, Ticketmaster outlets, Ticketmaster.com, or charge by phone toll free at (800) 745-3000. All tickets subject to applicable service charges and fees.

What:     Atlantic Records recording group Straight No Chaser has announced the release of their much-anticipated new album as well as details of a major North American tour - including a stop at McCaw Hall on December 31. “THE NEW OLD FASHIONED” – the world famous a cappella group’s fifth full-length release – arrives this October.

“THE NEW OLD FASHIONED” will be available for pre-order exclusively to fans that purchase tickets to “The New Old Fashioned Tour” from Monday, May 11th though Thursday, May 14th; an official iTunes Store pre-sale is scheduled for later this summer. Fans ordering now will receive two album highlights as instant grat downloads, including the medley “Beggin’/Counting Stars” (Frankie Valli and the Four Seasons and One Republic) and a stellar take on Bob Dylan’s “Make You Feel My Love.”

Straight No Chaser will celebrate the album’s release with what will be their biggest headline tour to date. “The New Old Fashioned Tour” sets off on October 16th in Las Vegas at the MGM Casino’s David Copperfield Theatre and then continues into 2016, concluding with 2 dates in Hawaii (Honolulu and Maui) to ring in the New Year (see attached itinerary). Pre-sale tickets will be available to members of Straight No Chaser’s official fan club beginning on Monday, May 11th; all remaining tickets will go on sale to the general public on Friday, May 15th. Full details – including complete ticket information and as-yet-unannounced dates – can be found at www.sncmusic.com/tour.

“The New Old Fashioned Tour” follows Straight No Chaser’s recently concluded “The Happy Hour Tour,” an epic 2014/2015 world trek which saw the group perform over 67 shows in the US alone, as well as dates in more than 15 countries, including Germany, Denmark, Sweden, Finland, Czech Republic, Austria, Holland, Belgium, France, Switzerland, Ireland, and the United Kingdom for more than 200,000 paying fans.

Additionally, Straight No Chaser is set to take part in one of their home state of Indiana’s greatest traditions, the singing of “(Back Home Again In) Indiana” prior to the start of the annual Indianapolis 500. The group – which was founded in 1996 at Indiana University Bloomington – will perform “(Back Home Again In) Indiana” during the pre-race festivities, taking on the honor following legendary entertainer Jim Nabors’s 2014 retirement after having performed the song live 35 times since 1972. The Indianapolis 500 Pre-Race Show airs live on ABC on May 24th at 12 Noon ET (check local listings).

Straight No Chaser’s fourth full-length release, 2013’s “UNDER THE INFLUENCE” saw the renowned vocal group reimagining a selection of their all time favorite songs alongside many of the superstar artists and undisputed music icons that made them famous.  Produced by Mark Kibble (a founding member of the legendary a cappella group Take 6 and one of Straight No Chaser’s primary influences), the album included unprecedented collaborations with some of popular music’s best and brightest – including Phil Collins, Stevie Wonder, Elton John, Dolly Parton, Rob Thomas, Seal, Sara Bareilles, and Jason Mraz – as Straight No Chaser put their distinctive and inimitable spin on songs known and loved the world over.

Long beloved for their trademark takes on Yuletide favorites, Straight No Chaser celebrated this past Christmas with a newly released version of their hit EP, “UNDER THE INFLUENCE: HOLIDAY EDITION” featuring “Text Me Merry Christmas (Feat. Kristen Bell).” Written by Emmy and GRAMMY® Award-winning writers David Javerbaum (The Daily Show) and Adam Schlesinger (Fountains of Wayne), the track proved an immediate holiday hit, garnering more than 1 million individual views in the 24 hours following its YouTube premiere (www.youtube.com/watch?v=EmhfdQlOiy0).  Other highlights on “UNDER THE INFLUENCE: HOLIDAY EDITION” include renditions of “White Christmas (Feat. Cee Lo Green),” “Merry Christmas Baby (Feat. Otis Redding),” and a timeless rendition of Paul McCartney’s classic “Wonderful Christmastime” that featured vocals by McCartney himself.

Additional Dates To Be Announced